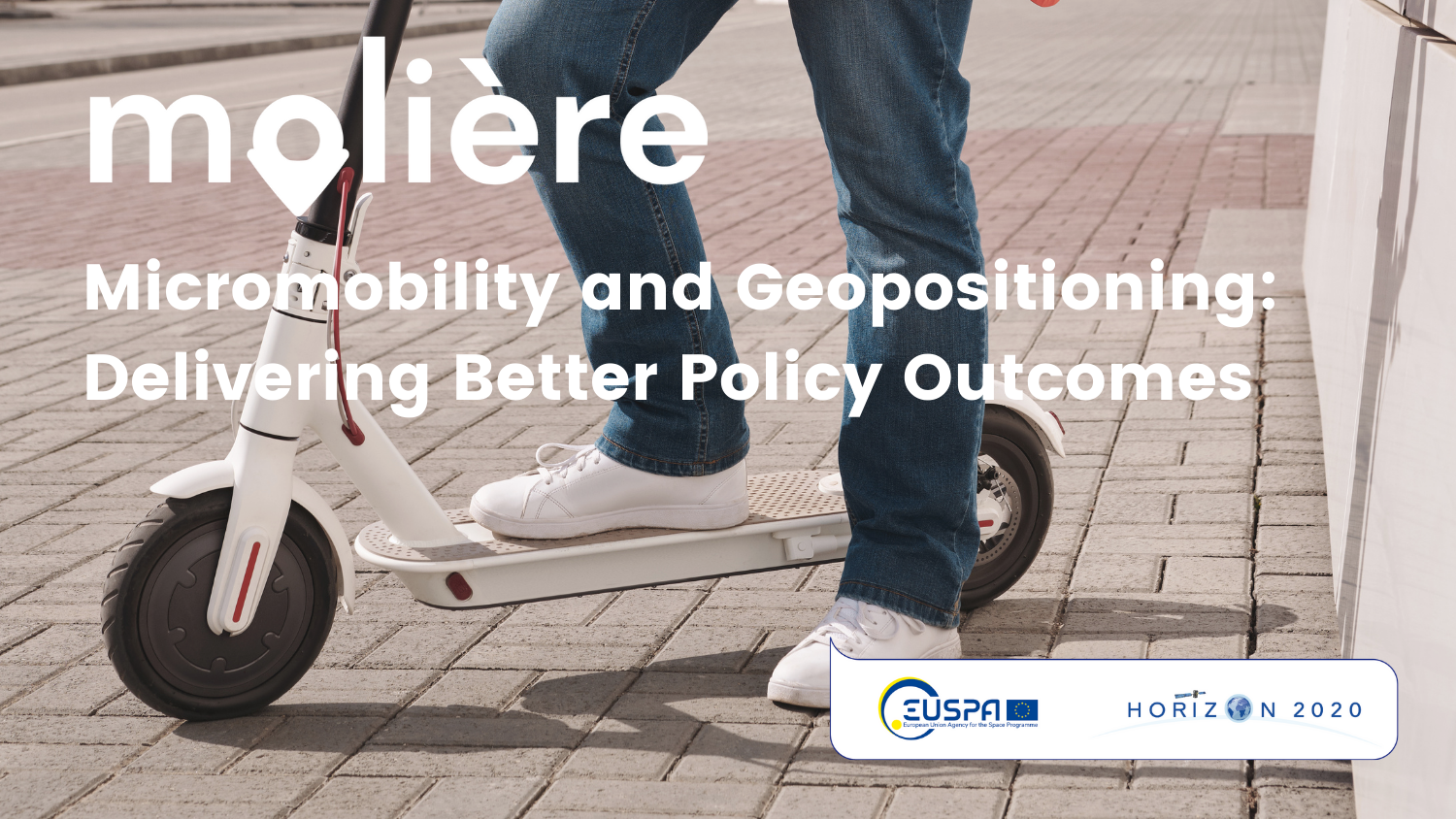 Micromobility has the potential to revolutionize how we move about the urban environment.  While it got off to a rocky start in many North American and European cities, the potential for e-scooters and bikes to provide a last-mile solution is profound. However, with this compelling opportunity to boost multimodality and encourage active transportation, there have been many concerns with the economic and operational sustainability of such an offer. More specifically, public safety has risen to become one of the primary concerns of the viability of micromobility and especially the proper use and parking of e-scooters, and one which the MOLIERE Project seeks to address.

MOLIERE will build the world’s best open data commons for mobility services, the “Wikipedia of public transport and new mobility data”, a Mobility Data Marketplace (MDM) underpinned by blockchain technology, raising the profile, visibility, availability, and utility of geo-location data from GALILEO, and will test it to fuel and demonstrate a diverse set of concrete, highly relevant mobility scenarios and use cases such as for micromobility, where geo-location data is key, addressing the needs of cities, public transport authorities, mobility service providers, and end-users.  According to Josep Laborda, CEO of FACTUAL: “MOLIERE will exploit the full potential of mobility-related data from the fusion of the GALILEO Satellite Navigation System, and the emerging blockchain and Distributed Ledger Technologies (DLT), where GALILEO will provide geo-location, and blockchain technologies will manage transport transactions at very low costs.”

Galileo is a global navigation satellite system (GNSS) that went live in 2016, created by the European Union through the European Space Agency (ESA), operated by the European Union Agency for the Space Programme (EUSPA). The €10 billion project is named after the Italian astronomer Galileo Galilei.  Galileo is intended to provide horizontal and vertical position measurements within 1-metre precision, and better positioning services at higher latitudes than other positioning systems.

Issues with Geopositioning and Micromobility

The error of the measurements of a standard GNSS receiver cannot be ignored at street level resolution. This is a classic problem in GPS and GLONASS which the European GNSS constellation Galileo aspires to solve by reducing the error component of the measures up to a few centimetres.  The source of the error is mostly due to multipath fading of the received GNSS signal. This is especially critical in urban environments as applied to micromobility, where the GNSS signal is likely to be received multiple times with different power levels and time delay.

Many of the proposals for using location data to enforce appropriate use of micromobility — parking properly, riding safely — rely on the concept of geofencing. Geofencing is the process of determining when a device has crossed inside of a predetermined geographic boundary.  But here again, poor location accuracy is causing significant problems. For one, the accuracy is not good enough to distinguish between areas that are nearby to each other – a street vs a sidewalk, or a park vs a bike path. This leads to unpredictable, automatic changes in scooter behaviour (e.g. speed limiting) and has resulted in customers simply ending the ride and walking away in frustration.  For micromobility, location accuracy, indoor/underground capability and low power performance plays a key, central role in the usability, safety, policy and economics of solutions, and areas in which the MOLIERE project seeks to address.

The days when companies would place kick scooters anywhere on sidewalks and bike lanes are long gone. Countries and City Councils demand regulation of micromobility.  Most of the policy outcomes a city is interested in enabling for micromobility center around city-wide or neighbourhood level behaviours, rather than the activity of a single individual vehicle. For example, ensuring that a scooter service has sufficiently allocated vehicles to underserved neighbourhoods or making sure that the provider does not flood the streets with more vehicles than they have licensed. For these types of policies, accurate location data such as from the Galileo program presents a highly reliable signal and an opportunity to drive better usage of our cities’ mobility infrastructure.

Galileo Geopositional Accuracy and Use Cases

The MOLIERE project will be demonstrating the geopositional accuracy of the Galileo GNSS satellite program through multiple methods through the use and compliance of micromobility services.  First, MOLIERE will partner with micromobility providers to offer the Galileo data feeds directly into micromobility devices, via on board units such as provided by partners including OCTO Telematics, or through third party sources.  Second, MOLIERE will partner with cities looking to demonstrate the use cases of higher accuracy Galileo satellite data to drive better compliance and improve public safety.  And finally, MOLIERE will through the Mobility Data Marketplace make Galileo satellite data available to mobility developers and other partners who want to gain access to improved geopositioning for related on-demand services, such as food & grocery deliveries, parcel shipping, and urban logistics.

While micromobility has been able to demonstrate a quantifiable modal shift away from single-car usage and less sustainable modes of transport, many of the challenges are yet to be addressed. By integrating effective geopositioning into the micromobility offer, users will gain the assurance that their experience is seamless and compliant with safety regulations. It is through this approach with the MOLIERE project that micromobility can realize a higher potential of compliance by users and operators, and as a result, enabling a more sustainable and well regulated urban mobility environment in our cities and regions.

This project has received funding from the European Global Navigation Satellite Systems Agency (now EUSPA) under grant agreement No 101004275.

Molière uses its own and third-party cookies for analytical purposes based on a profile drawn up from your browsing habits (i.e. visited pages). You can consent to our use of cookies by clicking on Accept, refuse it by clicking on Refuse or modify it on Settings.

Molière uses its own and third-party cookies for analytical purposes based on a profile drawn up from your browsing habits (i.e. visited pages). Cookie information is stored in your browser and performs functions such as recognizing you when you return to our website and helping our team to understand which sections of the website you find most interesting and useful.

Strictly Necessary Cookie should be enabled at all times so that we can save your preferences for cookie settings.

If you disable this cookie, we will not be able to save your preferences. This means that every time you visit this website you will need to enable or disable cookies again.